The arrival of the first snow fall in Canada harks the beginning of a white hot festival season across the country. From cultural celebrations to ice sculpture competitions and enchanted kingdoms for the kids, every festival is jam-packed with Canadian spirit and traditions.

Combine your ski and snowboard trip with a Canadian festival filled with magic for an extended snow vacation.

Get a furry bear hug from Bonhomme, the jolly mascot of the world’s biggest winter festival. Watch artists compete in creating giant, fantastical snow sculptures, and stare in wonder as a dogsled race winds through the narrow, snowy streets of the Old City.

Feel the excitement as canoes race across the ice-choked St. Lawrence River, smell the sugary aroma of warm maple syrup, and skate in the shadow of the ramparts of the only walled city north of Mexico. Stroll streets lit by Victorian lamps before dining in a cosy gourmet restaurant on local Quebec cuisine. Quebec Winter Carnival takes place every February.

The spirit of the voyageur endures at the Festival du Voyageur in the central Canadian province of Manitoba every February. Don your red beanie and bundle up in plaid flannel to really look the part, and then head to the Green Screen photo booth to be photographed in a virtual voyageur setting. Watch the legendary Voyageur Games, including wrestling, pillow fights, tug-of-war and log sawing.

Try your hand at the arts practiced by the voyageurs of yester-year, learn the stunning art of Métis beading, and how to play the wooden spoons. This dynamic cultural festival, featuring snow sculptures, lively music, and outstanding French- Canadian cuisine, is a kitchen party not to be missed.

The quintessential alpine town of Lake Louise comes alive during the 12-day Ice Magic Festival, also every February. Step into an enchanted winter wonderland, complete with ice castles, ice sculptures, the turquoise frozen lake and friendly Canadian winter spirit. Witness the excitement of the International Ice Carving competition, as as talented ice artists from around the world combine gruelling physicality with pure artistry, against the spectacular backdrop of snow-drenched forests and mountains.

Montréal en Lumiere is one of the largest winter festivals in the world, an annual celebration drawing 900,000 fans to the Quartier des Spectacles for music, circus arts, theatre, and world-renowned gastronomy. Every facet of culture glitters during the 11-day festival, as the free outdoor site bursts with open-air activities, braziers, shows, and activities for children. Montréal’s party spirit and flair for entertainment is irresistible.

The capital city of Whitehorse comes alive during its annual winter carnival, Yukon Sourdough Rendezvous. Visitors to Whitehorse will be treated to some wacky entertainment that reflects the good-humoured nature of the locals, with lip syncing, hair freezing, cross-dressing, and even beard growing competitions.

In addition to fantastic musical entertainment, concerts and snow carving, kids have the time of their lives at Kidsfest, complete with Slide and Glide on the toboggan hill, face painting, and traditional fare such as the egg toss and potato sack races.

The best part? It’s all free of charge – because that’s the spirit of Yukon. 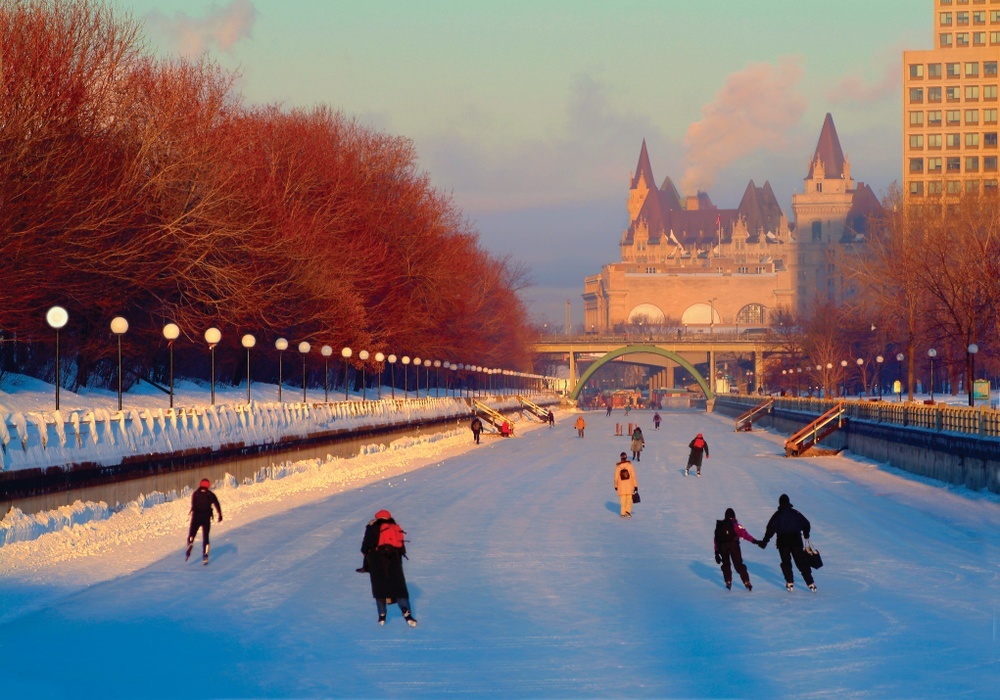 Join 600,000 fun-seekers as they celebrate Canada’s 150th birthday at Winterlude festival in Canada’s capital city of Ottawa, Ontario, from 3 – 20 February 2017. Skate the Rideau Canal, the world’s largest skating rink at 7.8 kilometres, and gaze in wonder upon amazing ice sculptures glittering against a night sky of breathtaking fireworks.

Little ones love Snowflake Kingdom in Gatineau, the largest snow playground on the continent. We’re talking horse-drawn sleigh rides, a snow maze, igloos and tobogganing, while foodies can’t get enough of Winter Brewfest, with its line-up of local craft beers and a rich palette of flavoursome cuisine.

Experience the magical spectrum of lights and colours at Canada’s leading illumination event, the Winter Festival of Lights (WFOL) in Niagara Falls, Ontario, from 16 November 2019 to 12 January 2020. This quintessential Canadian holiday tradition features more than three million lights displayed along eight kilometres, from the Niagara Parkway, past the roaring Falls, and into Dufferin Islands.

The festival is set to include Festival of Star concerts, laser light shows and weekly fireworks.

Contact us for your next Canada snow vacation and talk to us about winter festivals!

LOOKING TO BOOK YOUR DREAM CANADIAN SKI VACATION? WE CAN ORGANISE IT.
Enquire Now

You can find out more about which cookies we are using or switch them off in settings.

This website uses cookies so that we can provide you with the best user experience possible. Cookie information is stored in your browser and performs functions such as recognising you when you return to our website and helping our team to understand which sections of the website you find most interesting and useful.

Strictly Necessary Cookie should be enabled at all times so that we can save your preferences for cookie settings.

If you disable this cookie, we will not be able to save your preferences. This means that every time you visit this website you will need to enable or disable cookies again.